San Antonio Reformed Church uses a Presbyterian form of government.  This means a rule by a plurality of elders as set out in the Bible.  The Session of Elders focuses primarily on the spiritual needs of the church, and the Deacons focus primarily on the physical needs in their ministry of mercy.

Pastor Moody and his wife Billie are both blessed to be native San Antonians.  During college and seminary years they lived in Iowa, The Netherlands, California, and finished in Dallas.  After pastoring in Amarillo for five years, they returned home for Andrew to begin his labors as a church planter.

Andrew and Billie have 4 children: Eliana, Nathanael, Job, and Alethia. In addition to his pastoral ministry, Andrew works as a website designer and runs Reformation Art. He is a third degree blackbelt in American Tang Soo Do. 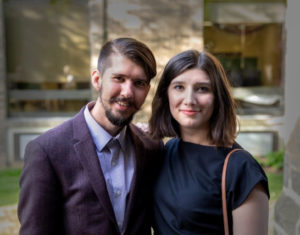 John Paul earned an M.Div at Westminster Theological Seminary in Philadelphia, PA. Before that, he gained a BSN degree from West Texas A&M University and an RN license which he put to use both prior to and during seminary working as an ICU nurse.

He and Corinne are native Texans, and are glad to bring their daughter Sophie Marie back to live in the Lone Star state. He is currently under the care of the Presbytery of the Southwest and working toward becoming licensed.